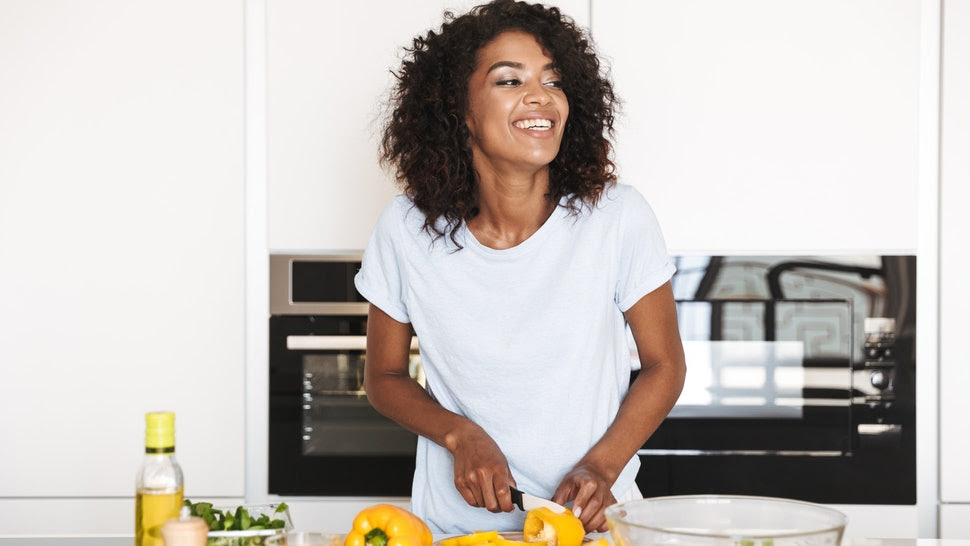 When you’re having a bad day, science says you shouldn’t automatically collapse on the couch; it might be a better idea to break out the recipe books. The emotional benefits of cooking are myriad; many programs around the world help people with mood disorders and other issues get into the kitchen as part of their treatment, a practice known as “therapeutic cooking.” And it’s something you can replicate in your own home, with a bit of effort and an ingredient or two.

Counselor Nicole Lambert of Movement Counseling Services tells Bustle, “Cooking helps mental health in that it can be a creative outlet. It’s a way to channel energy, can be used as a distraction, help build mastery in a skill, and a way to express emotions through a different medium.”

Of course, like exercise, just because cooking can be helpful for mental health doesn’t make it easier to accomplish. Certain mood disorders, such as depression, can lower your energy levels and appetite, making it more difficult to convince yourself to cook. But studies have shown that, for many people, mental health benefits ensue when the oven gloves come out, even if the result is something simple. And the effects are particularly enhanced if you’re cooking not just for yourself, but for others, too.

If you think this could be helpful for you but aren’t sure where to start, don’t expect to be dizzyingly brilliant in the kitchen at your first attempt; the skill of cooking takes practice, and all professionals and good home cooks have had years of stove time to refine their technique. Get a beginner’s cookbook and start small. You might be building up a tarte de citron in no time. Here are seven surprising ways cooking can be good for your mental health.

1. It Gives You A Reward At The End

Cooking and baking present two different aspects for mental health: the activity and the result. And both have benefits. Psychologists told Eater in 2014 that the reason that therapeutic baking courses work so well is because participants get something tangible for their efforts. It’s called “behavioral activation,” which means finding meaning in the things you do rather than just drifting through them. The benefit of the process of cooking is partially the fact that it results in tasty food — a good “reward” for doing a task, and a demonstration that your actions have resulted in something real.

2. The Creativity Makes You Feel Good

Easy recipes in particular seem to be carry strong mental health benefits because the process doesn’t create anxiety, but it does encourage focus — and, according to a study from 2016, it also boosts creativity and happiness. The study followed the movements and actions of 658 people closely and noted that when they did small, meaningful, calming things like baking over the course of their daily lives, they felt happier overall. The creativity involved in baking, the scientists behind the study thought, meant that people felt more grounded and capable. And that’s linked back to a lot of research on how creativity helps happiness.

3. It Improves Your Quality of Life

“Cooking is self-care at its most basic and nourishing,” Meg Bowman, a clinical nutritionist at Nourish Integrative Solutions, tells Bustle. “It is alchemy — you take ingredients and transform them into something delicious that feeds body and spirit.” And that, she says, gets us in touch with our physical selves. “Nourishing our bodies with food is one of the most fundamental ways that our outer world (what we can see, touch, and taste) communicates with our inner world (our physical body).”

This is backed up by science. A study in 2018 wanted to look at all the science that’s ever been done on specific cooking therapy for patients and communities, and it found some interesting conclusions. Therapeutic cookery, the scientists noted, “yielded positive influences on socialization, self-esteem, quality of life, and affect”. Being around others in cookery programs and classes was a big help for the participants when it came to feeling comfortable in groups, while they themselves felt more capable and better overall after a bit of time cooking.

Feel like cooking gets you into a calmer state? You’re not alone. “Cooking can feel like a meditation practice,” therapist Justyna Wawrzonek tells Bustle. “Many of my clients describe cooking as ‘being in the zone,’ a feeling in which they lose track of time and just focus on the task at hand. For someone who battles negative thoughts, worries, and is constantly bombarded with doubt, fear, shame, cooking can be a healthy outlet to bring peace and serenity into their headspace.”

And, she explains, this can carry into your physical body, too. “The practice of cooking not only eases the mind, but also relaxes your body,” says Wawrzonek. “It helps you get into the flow of the activity and eases the tension that can show up in our bodies when we feel anxious or depressed. ”

5. The Altruism Of Cooking For Others Is Good For You

Aside from the process of cooking and the delicious end result, there’s another aspect of making food that’s beneficial to mental health: doing it for others. Altruistic cooking, research has shown, has a strong part in many cultures as a way to bond with others; you cook to show you care in a time of crisis, to celebrate, to entertain, or just to nourish. And those social bonds in the kitchen are beneficial AF.

“Cooking can be a doorway to connection,” Wawrzonek tells Bustle. “Food brings people together, there’s no question about this. For someone who struggles with social contact, the act of sharing one’s creation of a home cooked meal can be really powerful. Positive feedback and just seeing someone else enjoy, appreciate and value your creation (the meal) has major implications for rebuilding one’s self of worth and value.”

Jamie McNally, an adjunct professor of psychology and owner of Sycamore Counseling Services, tells Bustle, “Cooking at home tends to save money, which in turn, can positively impact a person’s overall financial situation.” Money can exacerbate mental health conditions and the pressure on intimate relationships. “Since arguments about money tend to be one of the most common conflicts in a relationship, a couple could use cooking at home to strengthen their relationship not only by saving money, but also by using the opportunity to make a date night ritual,” suggests McNally.

Many mental health organizations emphasize that proper nutrition is a fundamental part of maintaining brain health. Dr. Andrew McCulloch, former CEO of The Mental Health Foundation, wrote that “nutrition should become a mainstream, everyday component of mental health care”. And cooking and baking for yourself allows you to be more aware of what you’re putting in your body, and how it reacts to different foods and dietary staples.

Nutrient-dense diets including lots of dark leafy greens, legumes, oily fish and berries have been conclusively linked to better outcomes when it comes to mood disorders. But not everybody reacts to food the same way; intolerances and gut microbiomes influence our reactions and therefore our moods. And cooking for yourself, experts say, is one of the best ways to take care of your own mental health, provided you have enough time to do it.

As if you needed another reason not to order delivery for the eightieth night in a row, doing it for the mental health boost can really come in handy. While there’s no shame in not cooking if you just aren’t feeling up to it, it’s worth noting the science behind taking this small step to nourish yourself.