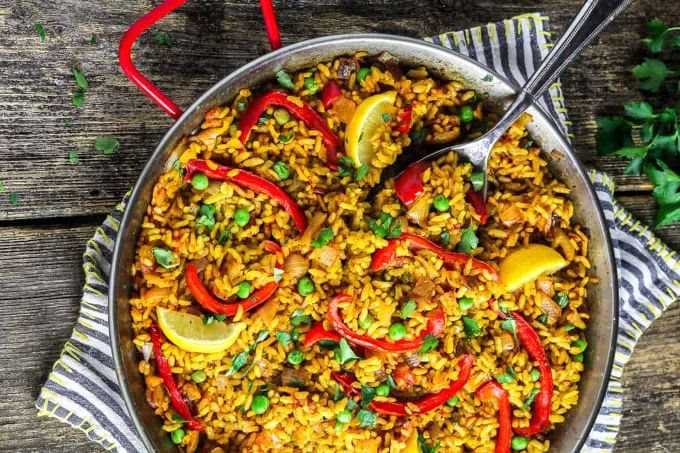 When we first moved to Arizona we experienced our first authentic paella at a Spanish restaurant in Scottsdale and we fell in love! It was hearty, aromatic and full of addictive flavors.

It’s a family-style meal that’s served in a paella pan right on your table. You don’t even need plates, you just dig right in! The ambiance of the restaurant is spot on with its rustic appeal and live Spanish music. We always have a great time when we go.

It’s an hour drive so we don’t get there as often as we’d like. So, I decided to make my own vegan paella at home. I asked the owner for some tips and his biggest piece of advice was to NEVER STIR THE PAELLA!

WHAT KIND OF RICE DO I NEED FOR VEGAN PAELLA?

The best rice to use is Bomba Rice because it has the ability to absorb twice the amount of liquid than regular rice without getting mushy. This short-grain Spanish rice will also absorb all the flavors of your broth, seasonings, and oil too. Another popular rice for paella is Calasparra Rice and would be my second choice for making authentic paella.

I buy paella rice online because it’s not readily available in many mainstream stores. You might find it in specialty or ethnic shops though.

However, if you can’t find them, the next best replacement is Arborio Rice which is commonly used for Risotto. It gets super creamy when liquid is stirred in slowly. Paella is not meant to be creamy, so you definitely don’t want to stir the arborio or you’ll end up with risotto. In fact, you shouldn’t stir paella at all once the broth has entered the pan.

WHAT GIVES PAELLA ITS GOLDEN COLOR?

Saffron Threads give paella its distinct golden color and flavor which is somewhat earthy and floral. It’s very subtle but really finishes the dish. It can be a little costly, so if it’s not in your budget you can replace it with turmeric. It will have a different flavor, but will still be subtle and make the rice golden.

DO I NEED A PAELLA PAN TO MAKE THIS VEGAN PAELLA?

I use a Paella Pan which is ideal but it’s not 100% necessary. If you don’t have a paella pan, I would recommend a large 12-14″ stainless steel pan. Don’t use one with a non-stick coating though.

A paella pan is a wide, shallow and thin metal pan with sloped sides. Its flat and wide bottom is designed to maximize the amount of rice touching it which helps create a delicious, toasty crust at the bottom. The sloped and shallow sides help the rice cook evenly too.

Paella is traditionally cooked over a fire and the pans were designed for that, so they work best on gas tops, grills or fire pits. However, I’ve made it on an electric stove with nice results.  I had to rotate the pan more, but the rice still cooked nicely.

This is the crispy golden crust that forms on the bottom of the pan. It infuses the paella with a deep smoky and slightly nutty flavor. It’s glorious!

HOW TO MAKE VEGAN PAELLA

Before you start, add the vegetable broth and saffron threads to a medium pot. Bring to a simmer over medium-high heat for 1 minute, then lower the heat just to keep it warm.

* Sometimes you might not get the socarrat to form and that’s ok. It all depends on the pan, fat content, heat source and experience. The more you cook paella, the better you’ll get at reading the signs. I’ve had times where I left it too long and it burned. That is never fun, so it’s better to have no socarrat than burnt socarrat. Your paella will still be delicious without it.

*Saffron gives the paella its distinct flavor which is somewhat earthy and floral. It’s very subtle but really finishes the dish. It also turns the rice to a beautiful golden color. It’s a little costly, so if it’s not in your budget you can replace it with turmeric. It will have a different flavor, but will still be subtle and make the rice golden.

If you don’t have a paella pan, I would recommend a large stainless steel pan (don’t use non-stick).