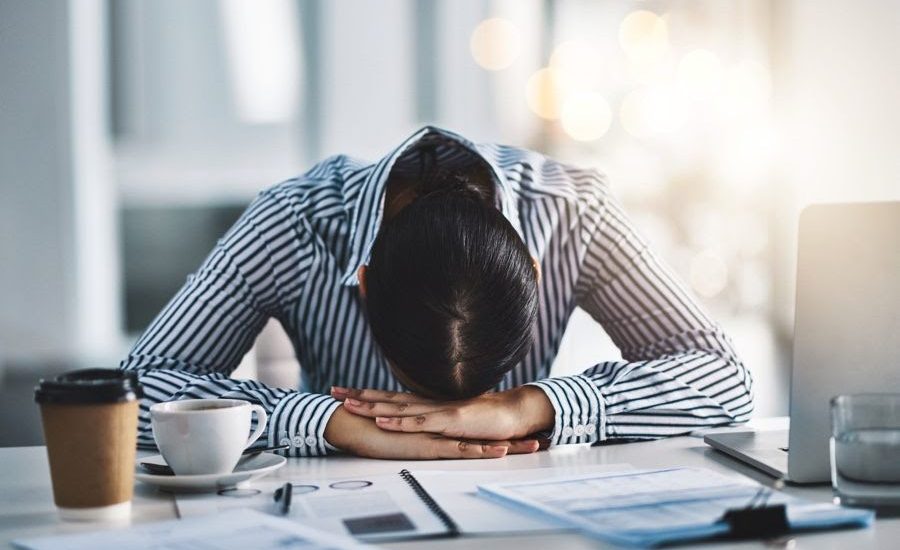 A new study suggests that burnout may also cause damage to the heart that can lead to a potentially deadly irregular heart rhythm.

Atrial fibrillation, also known as AFib or AF, is the most common type of irregular heartbeat, affecting at least 2.7 million Americans.

In addition to an irregular heartbeat, AFib can cause symptoms such as chest pain, heart palpitations, dizziness, shortness of breath, and fatigue. AFib can also increase your risk of stroke, even when symptoms aren’t present.

In the new study, which was published Jan. 13 in the European Journal of Preventive Cardiology, researchers found a link between severe burnout — also known as vital exhaustion — and the risk of developing atrial fibrillation.

The World Health Organization ties burnout to “chronic workplace stress that has not been successfully managed.” It may show up as exhaustion, being cynical about work, or feeling less effective at your job.

A recent Gallup poll found that about two-thirds of full-time workers experienced burnout on the job, with almost one-quarter feeling burned out “very often or always.”

Among physicians, burnout is just as high — around 67 percentTrusted Source.

However, study author Dr. Parveen Garg, an associate professor of clinical medicine at the University of Southern California’s Keck School of Medicine, told CNN that burnout can be caused by any stressor, including personal stress or tension at home or in your family.

Dr. J Shah, a cardiologist in Boulder, Colorado, and author of “Heart Health: A Guide to the Tests and Treatments You Really Need,” said anger, anxiety, and depression have all been linked to the development of coronary artery disease and congestive heart failure.

“But the impact on AF has not been established,” said Shah, who wasn’t involved in the study.

Previous research on the link between AFib and mental health has been mixed.

In one study, young and middle-age veterans with post-traumatic stress disorder (PTSD) had a higher risk of developing AFib.

Dr. Matthew Budoff, a cardiologist at the UCLA David Geffen School of Medicine in Torrance, California, who wasn’t involved in the study, said it’s not surprising that burnout might increase someone’s risk of AFib.

“When patients are stressed out, their adrenalin levels go up and that can drive one into atrial fibrillation,” he said. However, he pointed out that the effect of burnout on AFib in the new study was “modest.”

Small effect of burnout on AFib

In the new study, Garg and his colleagues followed more than 11,000 people for almost 25 years, looking for signs of vital exhaustion, anger, antidepressant use, and poor social support.

People who reported using antidepressants also had a higher risk of developing AFib, although this effect went away when the researchers took into account other factors that can contribute to AFib.

No connection was seen between anger or poor social support and AFib.

Especially since the most exhausted group was dealing with extreme burnout for a number of years.

There are several other well-established risk factors for AFib that you can modify, such as high blood pressure, heart disease, and binge drinking.

More research is needed to understand the relationship between burnout and AFib.

But Friedman said stress can activate the body’s physiologic stress response and cause the release of pro-inflammatory molecules. They may damage the heart tissue, which could then lead to the development of AFib.

Skipitaris said additional studies could look at whether “increased levels of inflammatory markers and increased stress somehow changes the electrical system of the heart to cause you to have AFib.”

Although the new study found a small effect of burnout on the risk of developing AFib, chronic stress can affect the body in other ways.

“People who are at risk of feeling chronically demoralized, dejected, and with little ability to affect positive changes may find themselves at higher overall cardiovascular disease risk,” said Friedman.

So even if your risk of AFib is low, learning to eliminate or manage stress is still a good thing.

“People need to find ways of alleviating stress when they feel burnout,” said Budoff, “be it by exercise, other interests or, of course, by changing their environment.”

Shah also pointed out that while mental health can have a negative effect on your physical health, the flip side is also true.

“Positive psychology interventions, such as increasing gratitude and forgiveness, lead to improvement in inflammatory markers and overall cardiovascular health,” he said.