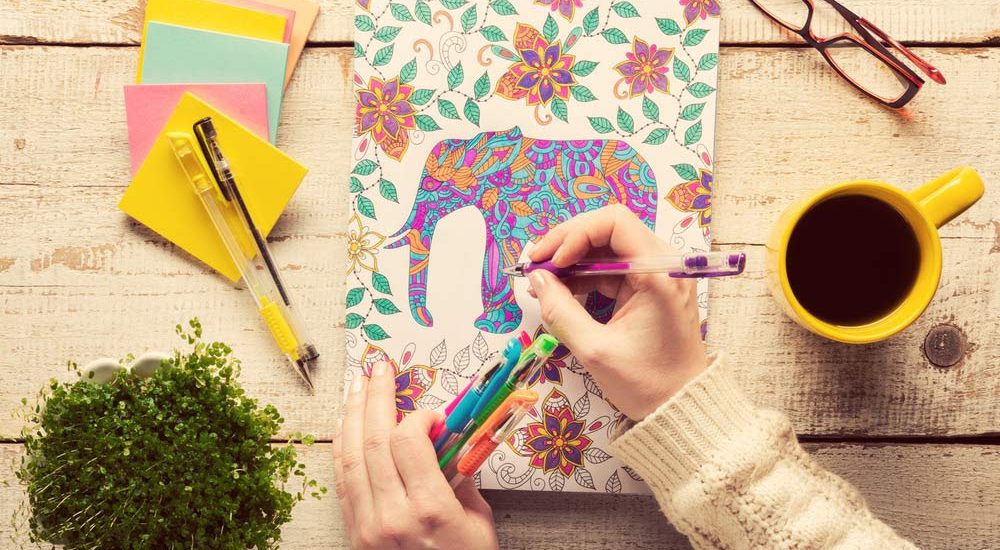 Once seen as child’s play, colouring books for adults are now a nationwide craze. Here’s why you should try it out for yourself.

Colouring calms down the busiest of minds

Thanks to its basic, repetitive motions, colouring engages parts of the cerebral cortex while relaxing the amygdala, the brain’s fear centre. A group of college students participated in one of the few studies of the mental health impacts of colouring. The students were instructed to write about something frightening (to spike anxiety levels). Then they were assigned to one of three activities: colour a blank page, colour a plaid design, or colour an intricate circular pattern called a mandala. Those who coloured the plaid design or the mandala were less anxious than those who had a blank page. For maximum meditative benefits, completely immerse yourself—so don’t watch Game of Thrones or text at the same time. Concentrate on the many sensations: What does the crayon feel like between your fingers? How does it smell? How would you describe the exact shade you’ve chosen?

Colouring can get rid of the dark circles under your eyes

By swapping your cellphone, tablet or laptop for a colouring book before bed, you’ll avoid exposing yourself to the sleep-sabotaging blue light emitted by electronic devices. In studies, researchers found that people who used an electronic device at night had greater difficulty falling asleep and got less REM sleep (necessary for rest and for memory consolidation) than those who didn’t. After they woke up, device users felt sleepier and their sleepiness lasted for a longer time than non-device users.

Still have painful memories of elementary school art class? Undo that psychic damage. Using a colouring book—especially one with intricately crafted designs—is like having a wonderful artist enlist you as a partner by asking you to shade in her or his designs. The current high priestess of colouring, Johanna Basford, declares that the people filling in her books are every bit as creative as she is. Check out the gallery on her website where you can see the mind-blowing cool panels created by fans.

Colouring may inspire you to invent the next Swiffer or Spanx

Grown-ups have relatively few opportunities for open-ended, unstructured play (Candy Crush doesn’t count). But it’s precisely those moments when our minds are engaged yet free to roam that unexpected associations and ideas pop up, unleashing inner creative genius. Colouring can also provide a way to experiment without worrying about failure or consequences.

Colouring can make you a work superstar

According to a study from San Francisco State University, workers who regularly engaged in a creative hobby outside of their jobs were rated by their colleagues as more innovative, helpful, and team-spirited than workers without a creative pursuit. Make it a win-win: invite your coworkers to colour with you one day at lunch.

Go to perform a seemingly simple task like, say, buying Greek yogurt, and you might find yourself stressed out in a grocery store aisle with a dizzying array of questions: What brand? What fat percentage? What flavour? Whoa—head hurts. This is what psychologists call “decision fatigue.” Colouring gives you a break from our crazy world in which a search for electric kettle on Amazon yields 1,143 results. Colouring pares down your dilemmas to only two: What page? What colour? Ah!

Colouring can add meaning to life, foster generosity to strangers, and increase tolerance of outsiders

It can also promote optimism and inspiration for the future, and can even make cold rooms warmer. No, colouring is not some kind of black magic, but it can invoke that most magical of everyday feelings: nostalgia. Researchers have found that nostalgia can have all of the previously mentioned effects. Note: This will work only if you coloured as a child, not if you try it for the first time now. It also helps if you can let the process of colouring—maybe it’s the smell of the crayons or the markers, or the scribbling motion that your hand makes—trigger a full-on, pleasurable sense memory from the past.

Colouring can help you age gracefully

Because colouring is a hands-on hobby, it helps you maintain your manual dexterity, something that diminishes as people age. And who says colouring is a solo endeavour? Many libraries and bookstores are hosting colouring events, and if you can’t find one near you, you could host your own. People with strong social bonds report greater happiness and health throughout their lives.