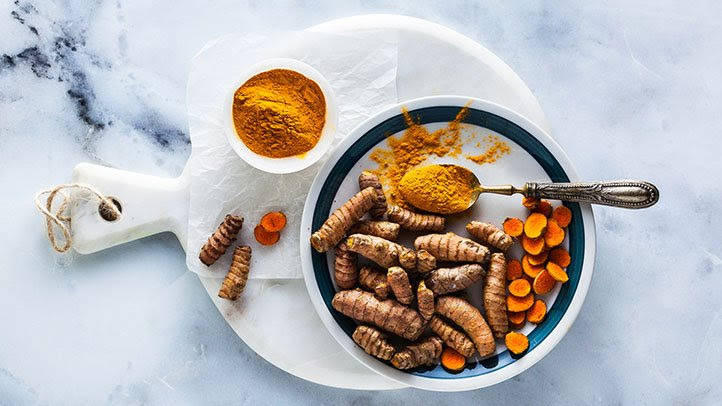 There’s no shortage of health claims about curcumin, the active ingredient in turmeric. But what does the research say?

Like many spices, turmeric (Curcuma longa) has a long history of use in traditional medicine. This flavor-filled spice is primarily cultivated from the rhizomes, or roots, of a flowering plant in India and other parts of Southeast Asia, and aside from giving curry its vibrant yellow color, turmeric is also known for having potent anti-inflammatory and antioxidant properties, according to a past review. (1)

The primary active component of turmeric — and the one that gives the spice its characteristic yellow color — is curcumin. (1) In fact, you can credit curcumin as the compound responsible for most of turmeric’s potential health benefits. “Curcumin is a natural antioxidant that has anti-inflammatory benefits, as well as [possible] benefits related to slowing the aging process and preventing Alzheimer’s disease and potentially depression,” says San Diego, California–based Elizabeth Ann Shaw, RDN, owner of Shaw’s Simple Swaps Consulting.

Unfortunately, turmeric (and curcumin on its own) doesn’t absorb well into the bloodstream, and having it in curry once a month is unlikely to give you the desired anti-inflammatory and antioxidant benefits, says Dana Angelo White, RD, owner of Dana White Nutrition. To reach the amounts of turmeric and curcumin shown to offer benefits in research studies, you’ll have to turn to supplements.

Still, you may be able to reap benefits by adding black pepper anytime you use turmeric, and/or taking a turmeric supplement that incorporates black pepper. “There is a compound in black pepper called piperine that actually helps to make turmeric more bioavailable,” White explains. Bioavailability refers to the amount of a substance that’s absorbed or able to be used by the body. (2) For instance, a past study found that consuming 20 milligrams (mg) of piperine along with 2 grams (g) of curcumin increased bioavailability by 2,000 percent. (3)

Here, we outline the many potential benefits of turmeric and curcumin.

1. Curcumin Is an Anti-Inflammatory

As chronic inflammation contributes to many chronic diseases, curcumin may help treat conditions like inflammatory bowel disease, pancreatitis, and arthritis. (5,1) We’ll get into some of those specific benefits later.

2. Curcumin May Protect Against Heart Disease

A past study shows that curcumin may improve endothelial function, or the health of the thin membrane that covers the inside of the heart and blood vessels. This membrane plays a key role in regulating blood pressure. (6) Lower endothelial function is associated with aging and an increased risk of heart disease. Thus, curcumin may help protect against age-related loss of function and reduce your likelihood of developing heart disease.

Another study found that curcumin was equally effective at improving endothelial function in people with type 2 diabetes (heart disease is a common comorbidity of type 2) as the drug Lipitor (atorvastatin), a medication commonly prescribed to reduce the risk of heart attack and stroke. (8,9,10)

Still, more research is needed to determine if curcumin is a safe and effective long-term treatment strategy for people with heart disease.

As inflammation is linked to tumor growth, anti-inflammatory compounds such as curcumin may play a role in treating and preventing a variety of cancer types, including colorectal, pancreatic, prostate, breast, and gastric cancers. (1) In fact, research in mice suggests that curcumin may help slow the spread of tumor cells and may even prevent tumors from forming in the first place. (11) It may do this in several ways, including disrupting the formation of cancerous cells at various stages in the cell cycle, interfering with cell signaling pathways, and even causing those cancerous cells to die. (11)

Whether curcumin can help treat cancer in humans has yet to be determined, but the research is ongoing.

Thanks to its potent anti-inflammatory properties, curcumin may be a safe and effective long-term treatment option for people with osteoarthritis (OA). In a past study, people with osteoarthritis who took 1,000 mg/day of Meriva experienced significant improvements in stiffness and physical function after eight months, whereas the control group saw no improvements. Meriva is a proprietary treatment made up of a natural curcuminoid mixture (75 percent curcumin; 15 percent demethoxycurcumin; and 10 percent bisdemethoxycurcumin), phosphatidylcholine (a chemical found in eggs, soybeans, and other foods), and microcrystalline cellulose (a refined wood pulp commonly used by the pharmaceutical and food industries). (12,13,14)

And a study in mice published in the June 2016 issue of Arthritis Research & Therapy found that 50 mg oral curcumin per kilogram (kg) body weight significantly slowed the progression of OA, whereas a topical curcumin treatment provided pain relief. (15) That said, whether these benefits would apply to humans has yet to be seen.

According to a past review of studies, curcumin may help treat and prevent diabetes, as well as associated disorders like diabetic nephropathy (also called diabetic kidney disease), which affects people with type 1 diabetes and type 2 diabetes. (16,17) One drawback: Many of the studies have been done only in animals, not humans.

For example, one study found that feeding 80 mg of tetrahydrocurcumin (one of the main substances of curcumin) per kg body weight to rats with type 2 diabetes for 45 days led to a significant decrease in blood sugar, as well as an increase in plasma insulin. (18)

Meanwhile, curcumin may help prevent diabetes through its anti-inflammatory and antioxidant properties, and improve many of the factors that contribute to diabetes, including insulin resistance, high blood sugar, and hyperlipidemia (a medical term to describe elevated levels of fat in the blood; one type of hyperlipidemia is characterized by high levels of LDL, or “bad,” cholesterol). (20,16) Still, more human studies are needed to confirm.

Turmeric may even protect your brain against common degenerative diseases like Alzheimer’s. How? By increasing levels of brain-derived neurotrophic factor (BDNF), a protein found in the brain and spinal cord that plays a key role in keeping nerve cells (neurons) healthy, as well as regulating communication between nerve cells, which is critical for learning and memory. (21) As common brain disorders like Alzheimer’s are associated with lower levels of BDNF, turmeric (curcumin in particular) may help delay or reverse brain degeneration. (22,23,24)

That said, much of the research has been done in mice. Researchers note more research is needed to confirm the effectiveness of turmeric in the prevention and treatment of common brain diseases.

7. Turmeric May Play a Role in Treating Depression

Like Alzheimer’s, depression is also associated with lower levels of BDNF. Thanks to turmeric’s ability to boost levels of BDNF, the spice shows promise as an effective antidepressant. In fact, one study found that injecting rats with 50, 100, or 200 mg/kg of curcumin for 10 days led to a dose-dependent increase in BDNF, with the higher dose of 200 mg/kg showing greater antidepressant effects. (25)

Meanwhile, in a study in humans that was published in the April 2014 issue of Phytotherapy Research, researchers randomly assigned 60 patients with major depressive disorder to one of three groups: one group received daily 20 mg of fluoxetine (Prozac is a common brand name), another received 1,000 mg of curcumin, and a third received a combination of the two. By the end of six weeks, the three groups saw comparable improvements, leading researchers to suggest that curcumin may be a safe and effective treatment for major depressive disorder. (26,27)

Still, scientists don’t fully understand the role of turmeric and curcumin in treating depression, and more research in humans is needed to confirm it is a safe and effective treatment. (28)

8. Curcumin May Play a Role in Treating Rheumatoid Arthritis

Curcumin shows promise as a treatment for rheumatoid arthritis (RA), a chronic inflammatory disorder that commonly affects the joints but may spread to other areas, such as the eyes, lungs, skin, heart, and blood vessels. (29) RA causes a painful swelling of the joints that can cause the bones to erode over time and ultimately lead to deformities and physical disabilities. (29)

In one study, people with RA were given 500 mg of curcumin, 50 mg of diclofenac sodium (a prescription nonsteroidal anti-inflammatory drug), or the two in combination. (30) After eight weeks, the curcumin-only group saw significant improvements in joint tenderness and swelling when compared with the other two groups. Researchers note the curcumin treatment was also safe, resulting in no harmful events. (31)

Thanks to its anti-inflammatory, antimicrobial, and antioxidant properties, turmeric may be an effective treatment for a variety of skin conditions, including acne, eczema (atopic dermatitis), photoaging, and psoriasis. Yet robust research is lacking.

One review published in the January 2018 issue of Open Access Macedonian Journal of Medical Sciences suggests oral curcumin in particular may be an effective and safe treatment option for psoriasis (a chronic inflammatory skin disease), but more studies are needed before making recommendations. (32)

According to the authors of another review, topical curcumin treatments may be useful in treating skin disorders, especially as past research suggests curcumin is relatively safe even at high doses. But curcumin’s bright yellow-orange color, poor solubility, and poor stability at a high pH make it an unappealing topical skin treatment. (33)

Antioxidants help protect your body against damage caused by free radicals, a class of highly reactive atoms that are generated in our bodies, as well as in environmental pollutants like cigarette smoke and industrial chemicals. (34) Too much exposure to free radicals can mess with the fats, proteins, and even DNA in your body, which may lead to a number of common diseases and health conditions, including cancer, arthritis, heart disease, and Alzheimer’s. (34) Therefore, antioxidant-rich spices like turmeric may play a role in protecting you from free radical damage.

Curcumin in particular is able to scavenge different types of free radicals, control enzymes that neutralize free radicals, and prevent certain enzymes from creating specific free radical types, according to a review in the October 2017 issue of Foods. (35)

11. Turmeric May Work As an Anti-Aging Supplement

Currently, there’s no evidence that turmeric or curcumin directly influence longevity, but thanks to their ability to fight inflammation, protect your body against free radicals, and potentially delay brain degeneration and other age-related diseases, turmeric and curcumin may be effective anti-aging supplements, according to past research. (36)

Studies also suggest that turmeric and curcumin are mostly safe, although some negative side effects (diarrhea, headache, rash) have been reported at doses ranging from 500 to 12,000 mg. (35)

Glaucoma, a group of eye conditions, is one of the leading causes of blindness in people over age 60. (37) And, unfortunately, once your vision is gone, it can’t be restored. (37)

But preliminary research published July 2018 in Scientific Reports shows topical curcumin treatments may help protect the eyes against degeneration. Researchers applied a proprietary curcumin eye drop solution to rats two times per day for three weeks. By the end of the study, the untreated rats experienced a 23 percent reduction in retinal cells compared with the treatment group, suggesting that loss was prevented by the curcumin treatment. (38) The study findings sound impressive, but more studies are needed to determine if curcumin is effective in preventing eye degeneration in humans.